Exam form fill up for BA 1st, 3rd & 5th semester is going on

Home  »  Tamenglong College at a glance 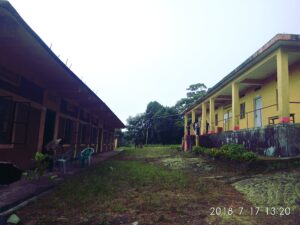 Tamenglong College, a co-educational institute was established in the year 1979. The governing body of the college was formed in the same year and it functioned for a period of 2 years. After a period of 5 years discontinuation, a new Governing Body was formed in 1985. A formal D.P.C was conducted for the recruitment of teaching and non-teaching staff on 24the July, 1986.  Since then, Tamenglong College started functioning as the only Higher Education Institute of the District. The college was converted into a full-fledged Governmental Degree College on 28th August, 1995.  The college is affiliated to Manipur University since 1992. The college was recognised by UGC on 5th September, 2000 and included under Section 12 (B) of UGC Act, 1956 vide letter No. F-8-1/102/2000 (cpp-1) dated 05/09/2000 received from UGC, New Delhi.

Located in one of the remotest districts of India, Tamenglong District  is 147 Kms away from the state Capital, Imphal. The college is located at Dimthanlong, Ward no.3, Tamenglong District, Manipur 795141. Inspite of so many challenges arising from geographical location, irregular electricity and transport problems, and bad of internet connectivity, the college gives affordable and quality education to all sections of the society especially Tribal communities. So far, this lone college of the district has produced notable number of leaders , intellectuals and officers.

The leaders of different tribes of Tamenglong district felt the need for higher education institution in the district head quarter. They convened a public meeting and resolved to establish a college. It was on Thursday, July 9th, 1979 at Tamenglong Bazaar Shed, a decision was taken for the establishment of a college in the district headquarter. Thus, emerged the picture of a higher education institution in the district.  A governing body was formed and a college called “Tamenglong College” was established and it functioned for a period of 2 years. After a period of 5 years discontinuation, a new governing body was formed in 1985. A formal D.P.C was conducted for the recruitment of teaching and ministerial staff on 24-07-1986. Since then the College has been functionally normally.A remarkable event of that time was the decision taken by Manipur Legislative Assembly in its winter session in 1990. The decision was “The government of Manipur resolved to establish one Governmental Degree college in every district headquarter”. The people’s representatives, public leaders of the district and the Governing Body of Tamenglong College endeavoured to fructify the decision of the Government of Manipur. The relentless efforts resulted in granting of affiliation by the Authority of Manipur University in 1992 to Tamenglong College.

At present there are 28 teaching faculty members (including the Principal) and 13 non teaching staff including the Librarian out of which five teachers are P.hd holders and 7 others have been awarded M.phil degress and 13 teachers have cleared JRF/NET. The college is an Arts’ degree college with 9 Disciplines offering General and Honours degree – viz. English (H), Economics (H), Education (H), History(H), Political Science(H) and Sociology(H). The pass percentage of students is around 87 % (taking into account the aggregate pass percentage of last five academic years examinations’ results).The College has a well-equipped Library with regularly updated latest books including students’ Text Books for those students who cannot afford to buy text books. To develop a sense of closeness and team spirit which is an essential part of education, the college conducts annual sports meet every year where various outdoor and indoor games like Football, Volleyball, Badminton, Table Tennis and Carom, etc are played.. The college holds seminars, talks, and various other co-curricular activities like cultural programmes, literary meet, Alumni meet, freshers’ meet etc to encourage the spirit of competition in students  and foster good relationship among teachers, students and other stakeholders of the college. The college has a large and spacious multi-purpose hall with IT facilities where seminars, talks and examinations are held. Each classroom has a white board and markers with enough benches and desks to cater around 40-50 students. Each classroom is electrified with ceiling fan and facility for Power Point Presentation.

Vocational Course in Horticulture was opened in the college under the programme ‘Vocationalisation of Higher Education in Manipur’ in the year, 2017.  The vocational education is under Rashtriya Uchchatar Shiksha Abhiyan(RUSA), Government of India. RUSA, The course is being looked after by Industrial Partner SYNAPX, Imphal. Around 10 students were enrolled in vocational course in the session, 207-18 and 25 students were enrolled for the year 2018-19.

The College has an active NSS Unit, led by a Program Officer. The program aims at developing students’ personality through community service. The NSS team of the college has organised District Youth Parliament where youths of the District participated in speech competition for attractive prizes in 2018. College level symposium too was organised by the college NSS in 2018. Also, the team has conducted various community services including-Clean India Campaign, public urinal cleaning campaign, drain cleaning, street cleaning, construction of widowed household toilets and campus social service.

The college has its IQAC cell with the Principal as the Head which plans, institute and supervise to increase quality, to ensure timely, efficient and progressive performance of Academic , administrative and financial tasks. The Students Grievance Redressal Cell of the college promotes cordial students- students and student-teachers relationship by encouraging students to express their grievances/ problems freely without fear of victimisation. Various other cells like, Environmental Awareness Cell, Career Counselling Cell, Soft Skill Development Cell, Alumni Association etc are formed for the smooth functioning of all academic and co-curricular activities.

The college aims to bring about a transformed change of English Education in Tamenglong District in particular and India in general producing the best of Nation’s Intellectuals, Scholars, Writers, Officers and Social Leaders by catering to the needs of students, understanding their feedback, letting them achieve perfection in every field with strict adherence to ethical and moral principles; and also updating  and upgrading with latest ICT facilities in teaching and learning process so as to make learning outcomes at par with those in best institutes of the country. The college observes all National and State Holidays in full spirit. National important days like Independance day, Republic day, Gandhi Jayanti are observed with full enthusiasm from teachers and students.